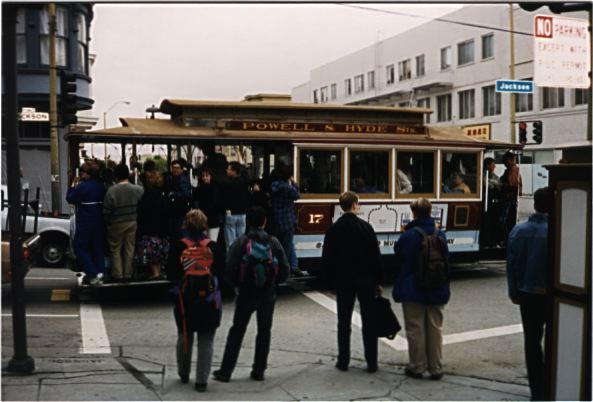 A San Fransisco Cable Car. As always full of tourists.

The first cable car line opened in San Fransisco 1873. It is the only form of public transport that can travel up a 25% hill and down again on the other side. The cars are operated by a cable (no less!) that travels at about 16km/h (10mph) in a slot in the pavement between the tracks. The driver operates a "grip" when he wants the car to go forward. The grip squeezes the cable and the car gain speed. As the grip is tightened, the car gets the same speed as the cable. During this process tremendous strain is placed on the cable and the grip. All the drivers are stronger that average men. All the drivers are men.

There are three types of breaks on a cable car:

During the 1970s, the cable car system was in very bad shape and the local authorities wanted to close the whole system. It was stopped by a large public outcry, thankfully. Instead, the whole system was rebuilt with new tracks. Each driver and conductor was also given resposibilty for their own car, including minor repairs. Finally, the fares was raised from ridiculusly low to a dollar or two.

(Back) to Lennart Thelander's Home Page